Threadle is possibly the most detailed, community-editable sewing database that exists today. Threadle is also a community that connects all kinds of people who sew. We enable you to organize, share, and document your sewing in ways that are helpful to others and to yourself.

You can keep track of and share your projects, search patterns using detailed filters, organize your pattern and fabric stash, connect with other sewists and just plain have fun browsing what others share.

Who is behind this? 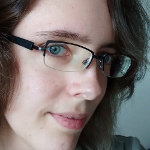 Sabine is a computer science graduate who had a pipe dream of learning to sew clothes that fit her. Like most people, she doesn't have a perfect body and retail patterns and clothes rarely fit her well. One of the dreams she has is that this site will help her develop her sewing skills to the point that what she makes becomes wearable. Sabine develops the site.

Barbara is Sabine's youngest sister (she goes by the name of Naatih in the forums). She takes care of the pattern database, draws illustrations for things, and does whatever else is necessary to make this work.

How did this come about?

The site has has been online since July 2014 and is constantly being refined and improved. It all began when Sabine discovered Ravelry in May 2014. She was mesmerized by the wonderful projects people shared, the open and welcoming culture, as well as the technical achievement of creating such a usable and highly functioning site. The advanced pattern search with its detailed filtering possibilities, in particular, impressed her.

Sabine looked at the existing sewing websites and pattern databases and realized that, after seeing Ravelry, she would have a hard time accepting the lack of a proper search function. So she set out to learn how to build a sewing database site.

If by beta you mean that development is ongoing and occasional bugs can happen, then yes, you could call this a beta website.

The site is already useful and being used by people. We do data backups and things are stable enough that we encourage you to come in and decide for yourself.

What technology does it use?

The site is built on Python/Django as well as numerous open source libraries and technologies. We do not use a content management system. Large parts of the site are custom-built. The database technology we use is PostgreSQL. We use Nginx as a web server. The faceted search is powered by Elasticsearch. Redis is used for caching and queueing purposes.

Some day we will elaborate and compile a thank you page that lists all the individual open source libraries and technologies we use, but not today.

What is your motto in developing the site?

Make it as useful as we can. Don't stick to things that don't work even when they took tons of time to develop.

Is this a commercial project?

Not anymore. The site was registered as a business and had a VAT identification number until Nov 2014. It may become a business again in the future, but only after there's a chance that it can earn enough to cover the additional costs associated with running it as a business.

We strongly believe that, when people collaboratively build a sewing pattern database, the database belongs to the people who built it.

Need to organize your projects and stash, too? Just come on in!